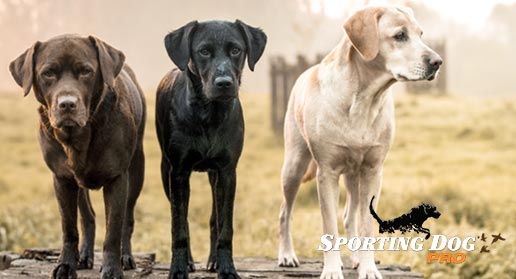 Known throughout the world as the best all around dog a family or a hunter can own is the Labrador Retriever. His near exemplary temperament is probably his greatest asset. The Lab, as this breed is commonly known, is usually listed first in popularity as a family pet, surpassing all other breeds by large numbers and remarkably remaining the number one ranked breed on the official AKC registry for 24 consecutive years, which is the longest reign as the nation's best dog in AKC history. Those figures alone make many who have never had the pleasure of owning a Lab want to understand the draw of this breed.

Looking to bring the best out of your dog? Take a look at these professional dog training collars.

The Lab, also known as the best all around sporting dog, is also at the top of the list of retrievers. A retriever at its most basic description is a dog that retrieves game for a hunter. However, the Labrador is so much more than that. Whereas, there are plenty of other breeds that are not retrievers that will certainly “retrieve,” it is the way the Lab goes about the pursuit and the handling of the game that sets him apart. First, and foremost a well bred Lab will put himself in great danger, whether it be icy waters or in the line of fire, to please his beloved master. He sees no danger and will put his life fully in your hands trusting that you would never allow him to get caught in a dangerous situation. The sheer dedication of this breed is astounding. Secondly, his handling and delivery of the retrieved game is of utmost importance. The Lab is known for his soft mouth, meaning he retrieves the game without biting down or chewing on the bird, delivering a desireable kill that remains intact whether for consuming or for the wall. Often breeders will use the sire and dames’ soft mouth as his strongest selling point when advertising his litter.

A bit about the Labrador Retriever's history.

Despite his name, the Labrador did not originate in Labrador. The Lab is believed to have originated in Newfoundland. The name Labrador could possibly have resulted in the geographical location of Labrador to Newfoundland. Located northwest of Newfoundland, the freezing waters of the North Atlantic would flow from Labrador to Newfoundland where fishermen would use the dogs to retrieve fish that fell off the hooks into the freezing waters. Therefore, because of their tolerance of the icey waters flowing south from Labrador, the breed developed its current name. The original name used to identify the Lab was “The Saint John’s Dog” because of the location in Newfoundland where breeders began to practice controlled breeding in order to maintain a high quality retriever.

The world's most popular breed did not receive that title simply because he is a good hunting dog but, also because a Labrador is an all around near perfect pet. When you think, of man’s best friend it would be quite common to picture a Lab. The Labrador is known for his gentle submissive personality that makes him a perfect companion for children. His intelligence and reliability make him the best possible family pet especially, the family with small children. The Lab is rarely aggressive in dangerous situations but, can be protective of his human children when faced with an uncertainty. A quick search of the internet would bring story after story of families and children alerted to danger and often saved by the family Labrador Retriever.

Anyone who has owned a lab knows that they are built for the water.

Because of his early selective breeding, the Labrador maintains a high quality waterproof coat and a chunky tail that is used like a rudder and often referred to as an “otter tail” in order to navigate all kinds of waters. A Lab feels most at home when offered a place to swim whether it be for training to retrieve or just to swim with the family. The AKC recognizes three coat colors for the Lab: Black, chocolate and yellow, with black being the most popular. Although, most people are sold on the color of the Lab they most love, there is no proof that one color of coat makes a difference in personality or biddability over another.

The Labrador, with his near perfect temperament and personality paired with his unmatched hunting and retrieving abilities are what keeps him at the very top of the charts for hunters and families alike as the their number one choice for a family pet.

Just as at home in the water as it is on land, the Chessie, as it is often called, is an astoundi...